It’s so easy to start off talking about the fact that as an artist I have been influenced by my life. Which is essentially true, haven’t we all, but when it comes to actual artistic influences there are specific people and movements that have had a great impact on me.

Pierre-Auguste Renoir: Renoir was probably my first influence as I loved his impressionistic images of life such as 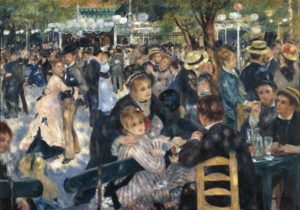 Michelangelo di Lodovico Buonarroti Simoni: Better known by his first name Michelangelo, has been an influence ever since I first saw the movie, The Agony and the Ecstasy, which played on the idea that artists must suffer for their work. I now understand that most of his suffering was in the fact that he didn’t want to paint because he considered himself a sculptor not a painter. He had a further impact on my work when in University I wrote a paper on the restoration that was done to the Sistine Chapel ceiling. The amazing colour that was revealed has an affect on me to this day. 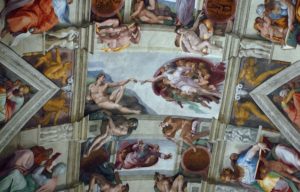 René François Ghislain Magritte: Magritte is by far my favourite artist. A surrealist, his images are playful, colourful and mind bending. Through his work I see that as an artist anything is possible on a canvas. But what influences me most are his sky’s, they are predominate in most of his paintings and I’ve come to realize that, when it comes to painting a sky and clouds, there are no mistakes. By far though my favourite painting of his is…

“The Treachery of Images” 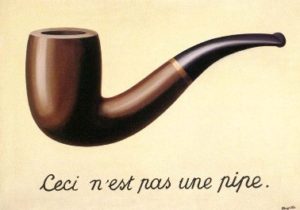 I reference this many times in conversations as it is a truth about painting for me. I was once asked why I don’t just paint backgrounds first instead of working them throughout my process and my answer was “it’s not a background but a shape beside a shape, which I make you think is background because of what I choose to paint in that shape”.

David Alexander Colville: Was a Canadian artist who often painted with broad flat plains of colour in a surreal manner with images of familiar things and events. I truly love his work and only wish I could have known him and visited his studio. 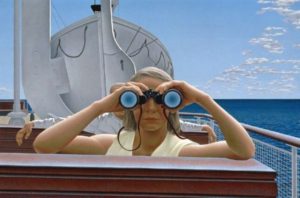 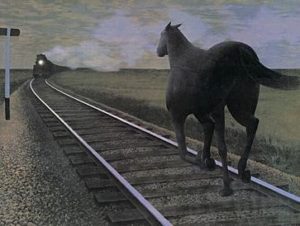 Edward Hopper: Was an American realist painter who painted images of his personal vision of modern American life. I have had many people compare my work to Hoppers’ which at first surprised me but I’ve come to realize that there is a commonality. He had architecture as a model for many of his images, but they are always infused with a moody melancholy, or a moment in time. 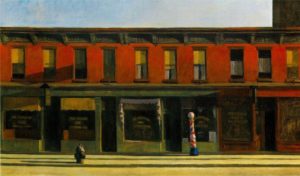 Another of my influences has been Andy Warhol, not necessarily for his work but for his truth as an artist. He was unapologetic about the way he lived and worked and became a “rock star” of the art world. How could an artist who lived through the 60’s and 70’s not have been affected by his cult of art.

And yes my work has been influenced by many other things, such as Saturday morning cartoons or even TV as a whole, by architecture and by life growing up as a Canadian. I’ve had my work referred to as social realism, which I think truly encompasses my many influences.